Back to All Inductees
Inductee
DUNGY, TONY 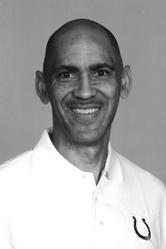 DUNGY, TONY
Born on October 6, 1955
Jackson, MI
Inducted On
June 12, 2008
Location Inducted
Indianapolis, IN
Region Number
7
Indpls Colts
Coach
Parkside, Jackson, MI
1973
University of Minnesota
1977
Earned a Degree in Business Administration
Professional Athletic Background: Earned a 148-79 overall record in 13 years as head coach with Indianapolis Colts and Tampa Bay Buccaneers; has taken 11 of his 13 teams to playoffs, including his last nine (1999-2008), tying Tom Landry for the most consecutive playoff appearances by a head coach since the 1970 NFL Merger; became the 35th coach in NFL history to earn 100 career victories with a 38-20 win at Houston on October 23, 2005; recorded his 100th regular-season victory vs. Tennessee on December 4, 2005; his .760 regular-season winning percentage ranks second-best in NFL history among head coaches with one team (minimum 75 games); his .668 regular-season winning percentage at the end of 2008 is the best among active NFL coaches with 50+ victories; one of 43 coaches to guide a club to a Super Bowl appearance; one of 20 coaches to win the Super Bowl in an initial appearance; joined Mike Ditka and Tom Flores as the only individuals to win the Super Bowl as a player and head coach; became first African-American head coach to win a Super Bowl; stands as first coach to beat all 32 NFL teams; was a defensive back with Pittsburgh when it won Super Bowl XIII after the 1978 season; he retired at the end of the 2008 season and now serves as an analyst on NBC's Sunday night football pregame show.

Colts Accomplishments: Dungy, the winningest coach in Colts history, has directed the club to an 92-33 overall record, seven playoff appearances, five AFC South titles, two AFC Championship game appearances and a 29-17 victory over Chicago in Super Bowl XLI, the franchise’s first World Championship in 36 years. From 2003-07 he guided the Colts to a club-record five consecutive division titles, while Indianapolis became the only team in NFL history to have five consecutive seasons with at least 12 wins. He was the only Colts coach to produce 10+ wins and playoff appearances in the first six seasons with the club. He directed the club to 13-0, 9-0 and 7-0 starts from 2005-07 to make the Colts the only NFL team to open consecutive seasons with 9-0 starts and the first team in 76 years to open three straight seasons with 7-0 starts. His 2005 team set the club seasonal record with 14 victories. The club's 63 regular-season wins from 2003-07 mark the second-highest total over any five-year span in NFL history.