Back to All Inductees
Inductee
FISHER, WALTER H. 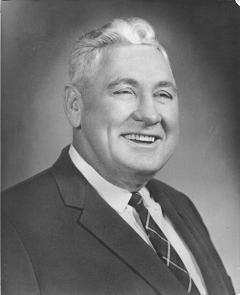 FISHER, WALTER H.
Born on January 1, 1970
1971
Inducted On
December 3, 1975
Location Inducted
Mississinewa, IN
Region Number
5
Muncie Central
Coach
Clear Spring, IN
1923
All-Star in football
Indiana University
1927
Earned three letters each in football, wrestling and track; awarded J. Gimbel Prize for Mental Attitude 1927.
Athletic director at Muncie Central for several years before retiring; worked as a football and basketball official after leaving coaching; entered the construction business and was former president of Muncie Board of Realtors; chosen “Realtor of the Year” 1967; was a member of Muncie Rotary Club; was Muncie Recreation Director 1928-1946 and later served as a member of the park board; appointed by Governor Matthew P. Welsh as Chairman of the Governor’s Advisory Commission on Recreation 1961; honored for outstanding service to recreation by Indiana Parks and Recreation Association 1967; for one year, the three Fisher brothers played together on same team at IU.
Wife, Ruby (Deceased)
Coaching Experience: Football coach for Muncie Central Bearcats 1927-1945, the only school in which he ever coached; record was 123-35-8, with a winning percentage of .769.