Back to All Inductees
Inductee
GILL, THOMAS ANDREW “ANDY” 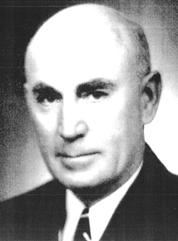 GILL, THOMAS ANDREW “ANDY”
Born on January 1, 1970
Washington, IN
March 10, 1947 in Daytona Beach, FL.
Inducted On
May 23, 2007
Location Inducted
Linton, IN (Posthumously)
Region Number
1
Michigan City
Coach
Linton, IN
1907
Indiana University
1912
Earned football letters 1909-1911; captain of freshman team which beat the varsity IU team 11-9; captain in 1911; when Purdue beat IU in 1911, Gill gave his head gear to fellow Linton star, Ollie Oliphant who played for Purdue; Oliphant wore that head gear during his next two years at Purdue and his first two at Army, finally stowing it away as a souvenir after it became so chewed up from play; earned letters in baseball 1910-1912 and captain 1912; one of only 17 athletes in IU history to captain two sports; lettered in track 1911, 1912; also participated in basketball.
Wife, Mary
Coaching Experience: Coached at Lombard College, Galesburg, IL, 1912; Albion College, Michigan, 1913; University of North Dakota 1914-1918; head coach at University of Kentucky 1918-1919, defeating IU 14-7 in Bloomington; that win was the last in that series until 1974, a period of 56 years; head football coach at Michigan City, IN, HS 1921-1940; active football coach for 29 years; also coached all other sports except golf; continued as baseball and track coach, as well as athletic director, until retirement in 1946.

Coaching Honors: In a memorial tribute in a Michigan City newspaper, it was written: "Our school and our community lost a man who was loved and respected in Michigan City....he provided a living inspiration of the fine and noble in man. He was a coach in the true sense of the word. He was not only an adviser in the games of sport, but also an adviser in the game of life." His ashes were scattered on the Michigan City HS football field which was renamed "Gill Field" in his honor.