Back to All Inductees
Inductee
KLIMCZAK, STANLEY “STAN” 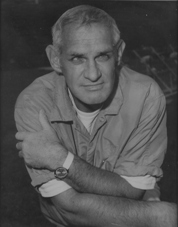 Coaching Honors: Referred to as the "Finest Line Coach in the State;" famous for the trap play up the middle; turned out 8 backs who rushed for over 1,000 yards in a single season; five players voted MVP of Northern Indiana Conference; 39 players named as NIC All-Conference selections; retired in 1976, but could not resist the call and returned as assistant coach at La Porte HS.