Back to All Inductees
Inductee
LUNDY, LAMAR 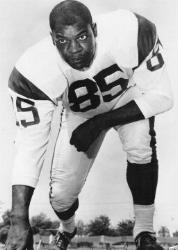 LUNDY, LAMAR
Born on April 17, 1935
Richmond
February 24, 2007.
Inducted On
January 16, 1975
Location Inducted
Richmond, IN
Region Number
8
Richmond
Player
Richmond
1953
All-American in both football and basketball; member of Indiana Basketball All-Stars Team, defeating Kentucky All-Stars 1953; was the first black athlete to receive a football scholarship to Purdue.
Purdue University
1957
Three-year starter and letterman in football and basketball; first black athlete to earn a regular position at PU in both sports; played in College All-Stars Football Game in Chicago; only Purdue player to win Big Ten MVP honors in both football and basketball.
Was honored in June, 1968, by home town of Richmond with Lundy Monday, a weekend affair which brought together men who had coached him throughout his career; past-president and member of the Board of Directors of the Indiana Football Hall of Fame; one of only two people inducted into both the Indiana Football Hall of Fame in 1975 and the Indiana Basketball Hall of Fame in 1990; inducted into Purdue Hall of Fame in 1995.
Daughters, Vicki, Tara, and Annie; sons, Lamar III and Ronald; 19 grandchildren and 5 great-grand children.
Professional Athletic Background: Was a fourth round draft choice of Los Angeles Rams; set National Football League records for a defensive lineman by returning 3 interceptions for touchdowns; member of Rams Fearsome Foursome (Lundy, Deacon Jones, Merlin Olsen, and Rosey Grier), considered the most well-known and dominant defensive line in NFL history; had also been drafted by the St. Louis Hawks (now Atlanta) basketball team in 1957, but chose to play football with the Rams.

Coaching Experience: Assistant coach for San Diego Chargers in 1970, retiring due to illness.