Back to All Inductees
Inductee
MACKENZIE, JAMES A. 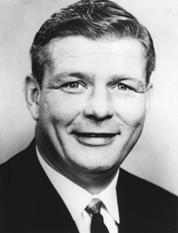 Coaching Experience: Was a graduate assistant to Paul "Bear" Bryant at Kentucky; assistant football coach 2 years in Jenkins, KY, and 2 years as head football coach at Allen Military Academy in Texas; in 1957, became assistant coach at University of Missouri, then moved to Arkansas as defensive coach, moving up to assistant head coach; in 1965, became head coach for Oklahoma University where he remained until his death.

Coaching Honors: Arkansas won Cotton Bowl in 1964 and the Grantland Rice Trophy symbolizing the National Championship; during his tenure at Arkansas, teams played in 6 bowls in 8 years; named Big Eight Coach of the Year 1965; coached on the staff of the East-West game.