Back to All Inductees
Inductee
OTOLSKI, BOB 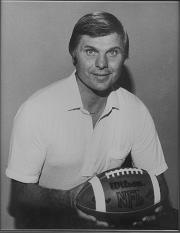 OTOLSKI, BOB
Born on August 24, 2021
South Bend
Inducted On
June 24, 2000
Location Inducted
South Bend, IN
Region Number
2
Mishawaka Marian
Coach
S. Bend Washington
1955
Member of 1953 Mythical State Champions team.
University of Indianapolis 1960; Indiana University MA 1965
1965
Won 3 letters in football; played both offense and defense; did all the kicking, kick-offs, extra points, and field goals; led team in pass receptions and receiving yards in 1957; led in quarterback sacks in 1958; led conference in punting and named 2nd Team All-Conference in 1957-1958.
Named as one of the Outstanding Young Men of America for his community service in 1972; named Distinguished Hoosier by Governor of Indiana for his work in the community; awarded Key to the City of Mishawaka in 1985; on the Board of Directors for the Decatur Athletic Council, helping get funds for student athletes; inducted into Mishawaka Marian Hall of Fame, 2000, and University of Indianapolis Hall of Fame, 2001; Mishawaka Marian stadium named "Otolski Field" in 2002; he is now retired.
Wife, Patti; son, Lance, and daughter, Becky; grandson, Casey.
Coaching Experience: Assistant coach at St. Joseph and head coach of B team 1961-1963, with record of 23-4; head coach and athletic director at Mishawaka Marian 1964-1972, with a record of 76-11-3; won 4 Indiana Valley Conferences and had 4 undefeated seasons; assistant coach at Indiana University 1973-1980, helping turn program around by developing the best Big Ten offense, plus a top-ranked punting game; head coach at Illinois State University; developed a program in third season that was ranked #18 with a record of 6-4-1; best defensive team in Missouri Valley in 1984 and 1985.

Coaching Honors: Named Coach of the Year 1971; was runner-up 2 other times; coached Marian team to regular top 10 in state; 1st high school coach to be named as head coach of the Indiana High School North-South All-Star Game in 1972; assisted Indiana University to win the first Bowl Game in history of school by beating BYU 38-37 in 1979; at Illinois State, more than 40 offensive records were tied or broken and ranked in the top 20 in 3 out of the last 5 years.