Back to All Inductees
Inductee
TILLER, JOE 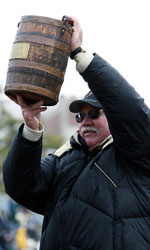 TILLER, JOE
Born on December 7, 1942
Toledo, OH
Inducted On
June 21, 2012
Location Inducted
West Lafayette, IN
Region Number
4
Purdue
Coach
Toledo, OH, Rogers
1961
Montana State University
1965
Honorable Mention All-American offensive tackle; team captain.
Member of American Football Coaches Association; in demand as a public speaker throughout United States; instrumental in formation of Northwest Indiana Chapter of the National Football Foundation, promoting youth football; chapter was renamed in his honor in June, 2007; an autobiography, Tiller: Not Your Average Joe, was published in 2006; awarded Order of the Griffin, one of PU's highest honors in January, 2008; appointed head coach emeritus by PU Board of Trustees on November 21, 2008.
Wife, Arnette; children, Renee, Julie, and Mike.
Professional Athletic Background: Drafted by the Boston Patriots of the American Football League in 1964 but did not sign; played for Calgary of the Canadian Football League during 1964 season.

Coaching Honors: Won back-to-back WAC title and went to 2 Holiday Bowls while with Washington State; while with Wyoming, team ranked in top 20 nationally in passing offense and top 30 in total offense each season; won 1996 WAC Pacific Division title and a share of 1993 WAC Championship and a trip to 1993 Copper Bowl; named GTE Region 5 Coach of the Year by American Football Coaches Association; Purdue team played in Champs Sports Bowl in 2006, the Sun Bowl in 2004, the Capital One Bowl in 2003, the Sun Bowl in 2002 and 2001; served as an assistant coach for the 2001 Hula Bowl; lost to Washington 34-24 in 2001 Rose Bowl; played in Outback Bowl in 1999 and Alamo Bowl in 1997 and 1998; named National Coach of the Year by Football News and Kickoff magazines; the GTE Region 3 Coach of the Year (Big Ten, Mid-American Conference, and Conference USA) by American Football Coaches Association and Big Ten Dave McClain Coach of the Year; finalist for Paul "Bear" Bryant National Coach of the Year and for National Coach of the Year by The Sporting News in 1997; engineered 10 bowl berths in 12 years from 1997 to 2008 while at Purdue, an average of more than 7 wins per season and a Big Ten Championship in 2000; had PU teams that qualified for 10 of 15 bowl games in school